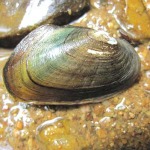 One of the most endangered species of all endangered species is the Carolina heelsplitter mussel. In 2012 the U.S. Fish and Wildlife Service (USFWS) reported that only 154 individual mussels remained in the wild in the 11 stretches of streams that held them in North and South Carolina. The largest known population is found in Flat Creek in Lancaster County. In October, the Carolina heelsplitter population in Gills and Flat Creeks in Lancaster County got a boost. Approximately 300 endangered mussels were placed in each stream by USFWS staff. The mussels were placed in the creek by hand by the USFWS biologists in portions of the each creek on properties that are owned by the land trust. Heelsplitters require cool, clean water that is well oxygenated. They also need a stable and silt free streambed in order to survive. Both Gills Creek and Flat Creek have these necessary conditions. Former KVLT executive director Barry Beasley states “protecting heelsplitter habitat has always been a priority of the land trust. We are very proud to own properties that possess the conditions that provide heelsplitter habitat and we are excited that the USFWS was able to place the young mussels in the creeks on KVLT’s conserved properties”.