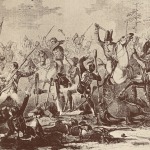 KVLT recently acquired an easement protecting 50 acres of the Revolutionary War battlefield that was the site of the Battle of Waxhaws or Buford Massacre, which occurred on May 29, 1780. This battle was an engagement between Continental troops led by Colonel Abraham Buford and British troops and Loyalists commanded by Lieutenant Colonel Banastre Tarleton. Almost as quickly as it had begun, the Battle of Waxhaws was over. British casualties were slight, with 5 killed and 14 wounded. The Americans lost 113 men killed and 203 wounded. Colonel Buford managed to escape from the slaughter. He reported what he saw on the battlefield to Patriot officials and the effect was electrifying. The Battle of Waxhaws became known as “Buford’s Massacre” and Tarleton, already known as an aggressive commander, was condemned as a butcher. This conservation project is a partnership between KVLT, the South Carolina Battleground Trust, the Civil War Trust, the National Park Service and Lancaster County.
Barry Beasley, former KVLT Executive Director states, “the land trust has a strong interest in protecting important historical sites and we are delighted to hold this easement that protects this site. KVLT expects two other land protection protecting Revolutionary War sites in 2018.